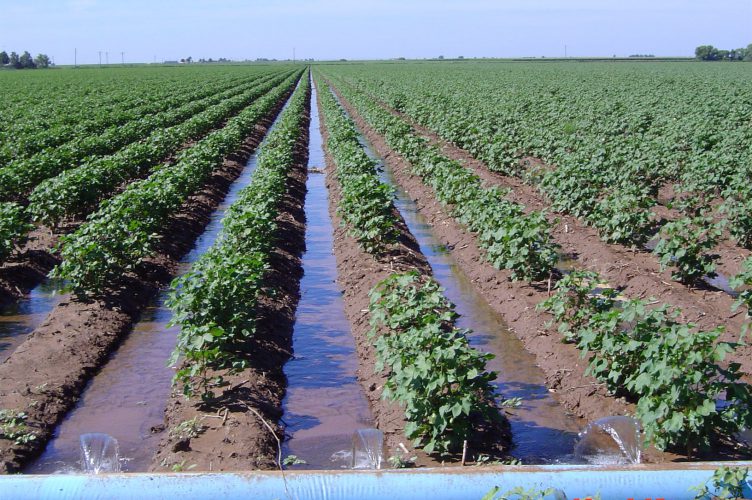 One of the first widely used irrigation systems for watering from the Ogallala Aquifer in the 1960’s and 70’s was “Flood” or “Furrow” irrigation. Typically fields were bedded with 40″ raised beds and water was flooded down the bottom of the furrows between beds to fill the soil profile for use by the crop. This practice, while more practical in certain situations is still in use, however is one of the most inefficient water delivery systems with high evaporation rates and requires much closer monitoring and labor to irrigate a field crop. 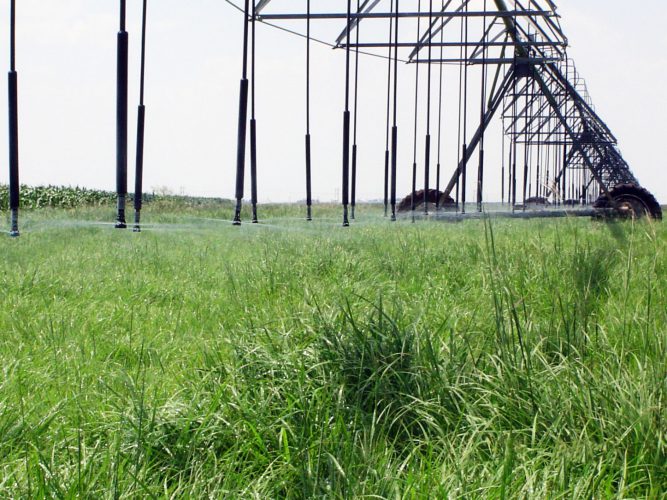 Center pivot irrigation systems are one of the most common water delivery systems on the Texas High Plains drawing water from the Ogallala Aquifer. One of the first center pivot systems used was the MESA (Medium Elevation Spray Application). This system was widely used and was more efficient than furrow or flood irrigation, however due to the elevation the spay pattern was subject to higher evaporative losses due to wind. 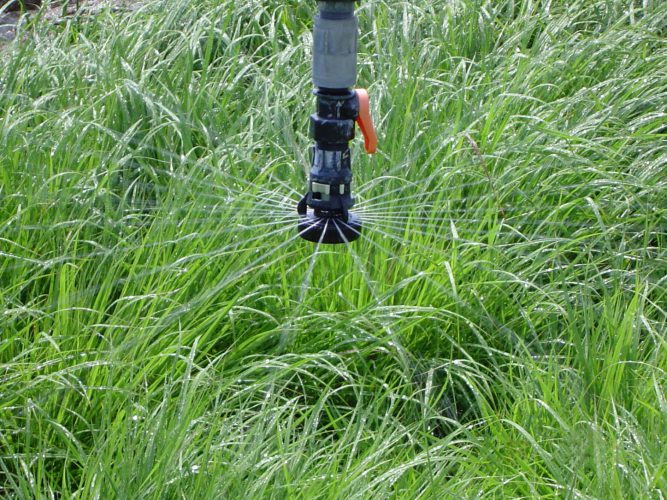 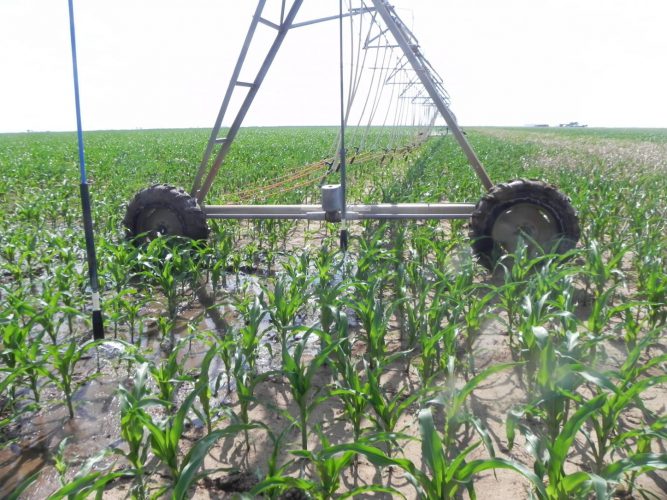 While not adhearing to the original definition of a LEPA (Low Energy Precise Application) system, over time LEPA was modified with “bubbler” style nozzles that could be converted to LEPA or LESA by simply turning the pads on the bottom of the nozzles to change modes more quickly and easily. This photo depicts a nozzle in the LEPA bubbler mode in the foreground. LESA mode can be used to more uniformily germinate the crop then switch to the more efficient LEPA mode. The span beyond the tower drive wheels is equipped with PMDI drag lines. More on this type of system in another photo. 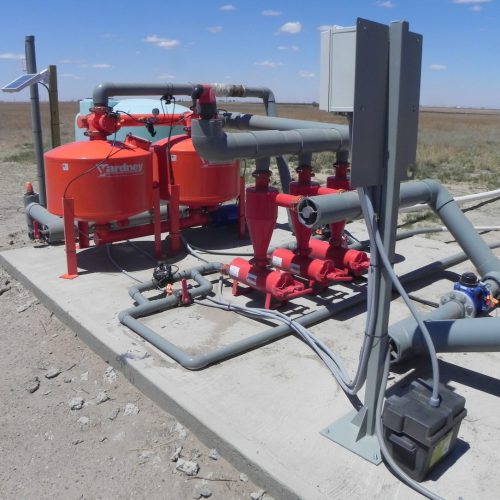 Though this technology has been around for many years, a more recent development on the Texas High Plains has been the introduction of Sub-surface Drip Irrigation (SDI) systems. These systems are the most efficient, however require a different management style and skill as opposed to the center pivot systems since water can not be seen during application. In this photo you can see the sand media and hydro-cyclone filtration required to keep the tapes in field from plugging with contaminates. 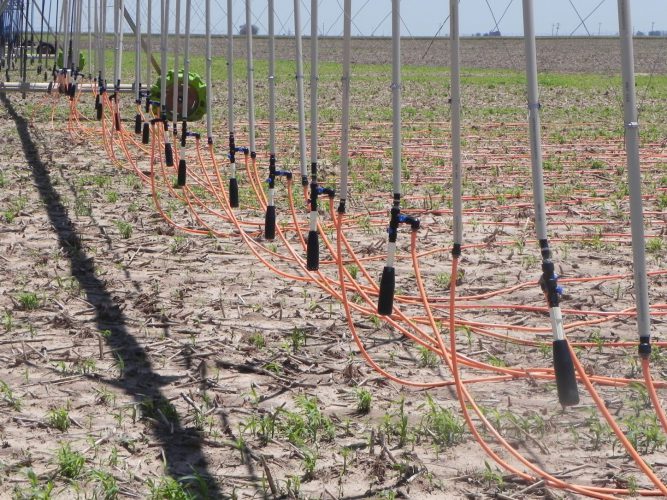 A newer technology for converting a pivot to drip is Precision Mobile Drip Irrigation (PMDI). This technology is less expensive to install than traditional sub-surface drip and can allow a pivot that no longer has sufficient water volume for pivot water application to be converted to this drag type drip system providing extended use of the pivot investment and water conservation through concentrated water application delivery. 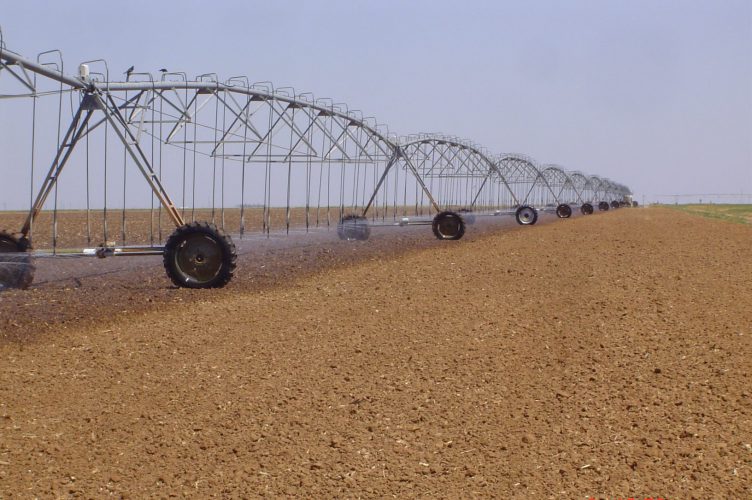 Pre-watering is a common practice on the Texas High Plains and we need to ensure that as little water as possible is wasted or lost due to evaporation, deep drainage or runoff. Utilizing this water as close to the time it is needed for the crop as possible is one way to make the most of the water applied. 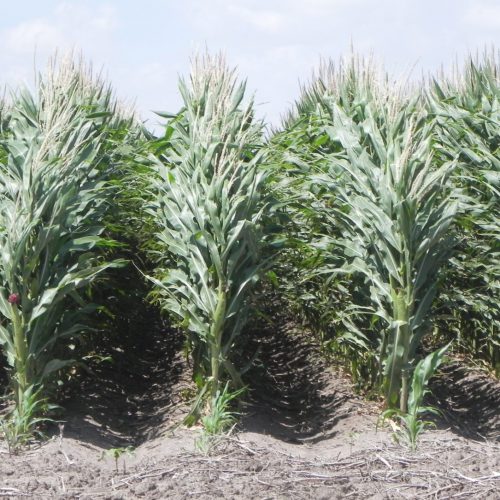 Water savings can also be achieved through more drought resistant crop varieties. Much work has been done to reduce the water needs for many of our major crops. 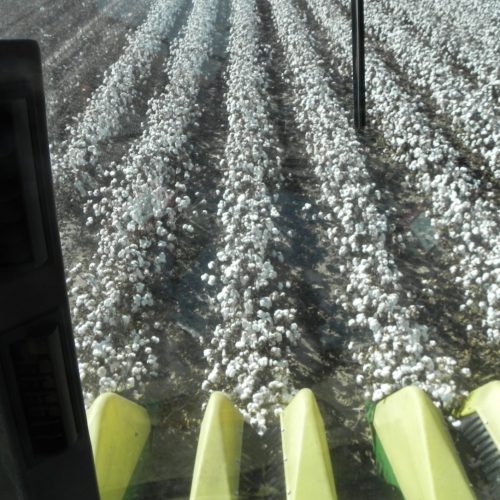 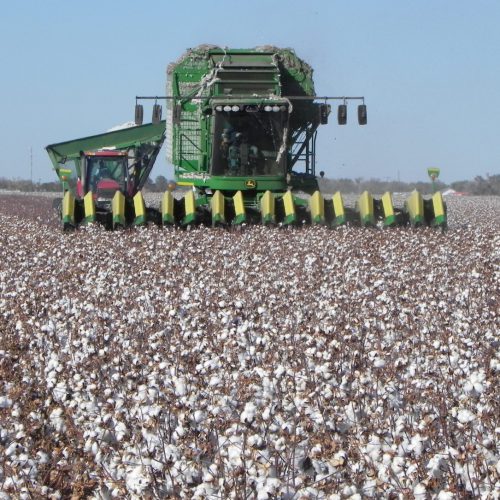 Cotton strippers have been used in this area for many years to harvest the cotton. Strippers could fill their baskets and when full dump to a boll buggy that would then take the cotton to a stationary module builder to create a compressed “module” of cotton that could then be transported to the gin via specially equipped transport trucks. 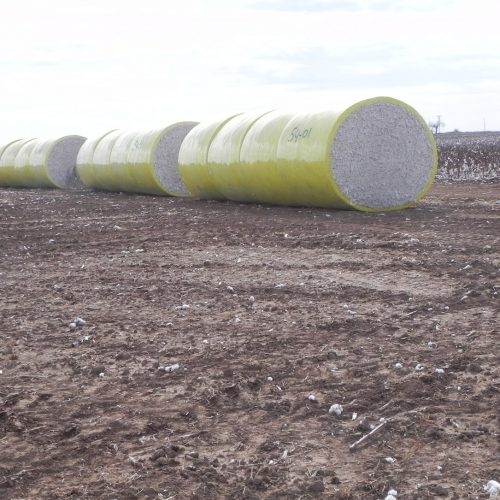 Newer harvest technologies will allow producers to decrease the amount of labor and time required to prepare cotton for transport to the cotton gin as well as provide better protection from the elements and less loss in handling and transport. 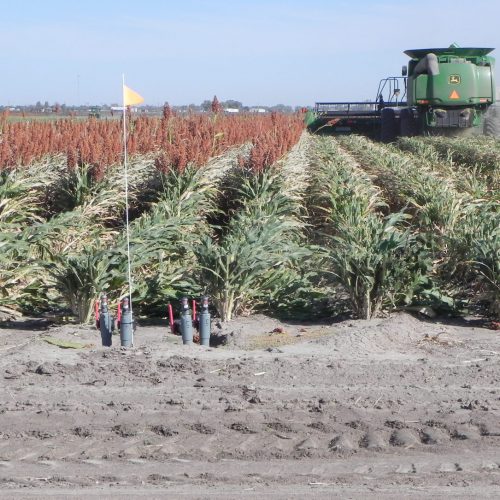 A drip irrigated grain sorghum or “milo” field being harvested for grain. The remaining residue could be baled, grazed or re-incorporated to the field for its soil benefit. 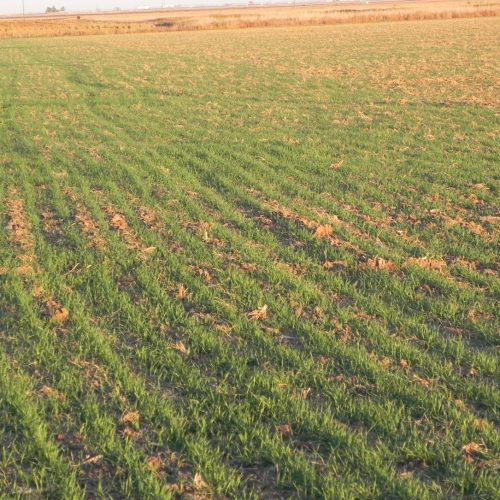 Wheat is planted for many purposes including as a cover crop, for winter grazing, silage, hay and grain. Having a crop such as wheat planted protects the soil from wind and water erosion, and can potentially capture more winter moisture due to the ground cover. Unfortunately it also is removing soil moisture during a time when many crop producers would prefer to be building soil moisture for next years crop. Benefits of a cover crop generally outweigh the negative. 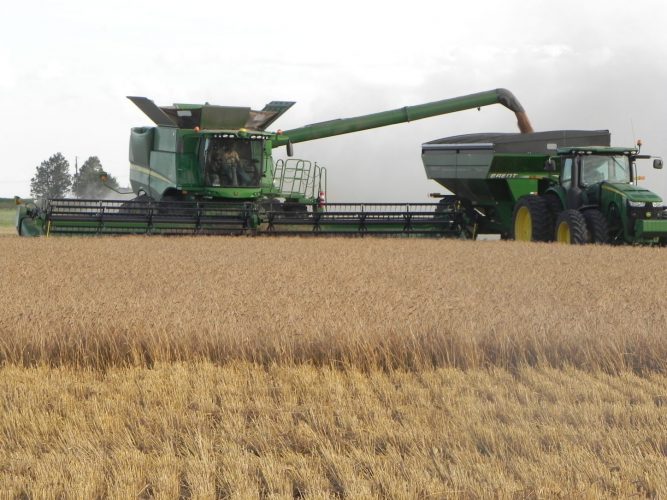 Wheat without adequate water in the winter months can have a greatly reduced yield potential, however it provides much needed cover during this time of year to reduce erosion and can still provide potential grain, hay, or grazing opportunities. 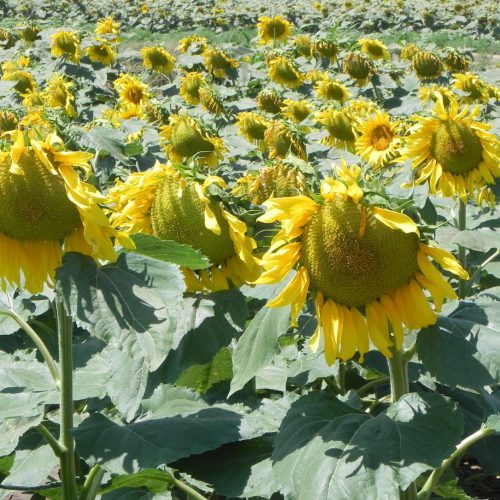 Besides the major crops of corn, cotton and grain sorghum, producers explore alternative specialty crops such as sunflower. Sunflower is a lower water user and can provide a viable alternative to the more commonly grown field crops. 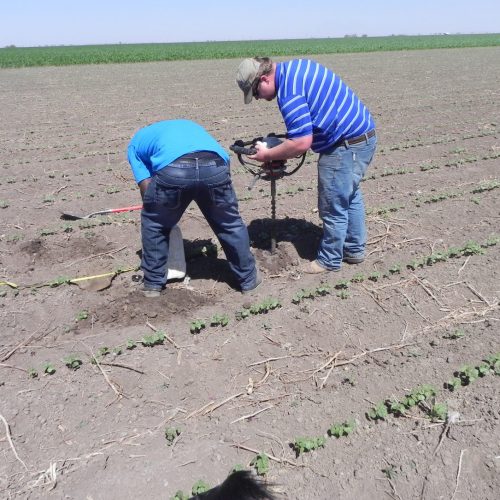 One way to manage your water applied and manage your crop efficiently is to know how much soil moisture is present by utilizing newer technologies. In this photo a soil moisture probe is being installed in a producer field which will allow him or her to monitor the change in soil moisture status due to an irrigation or rain event via a web interface to help determine when additional water for the crop is needed at any given stage of development during the growing season. 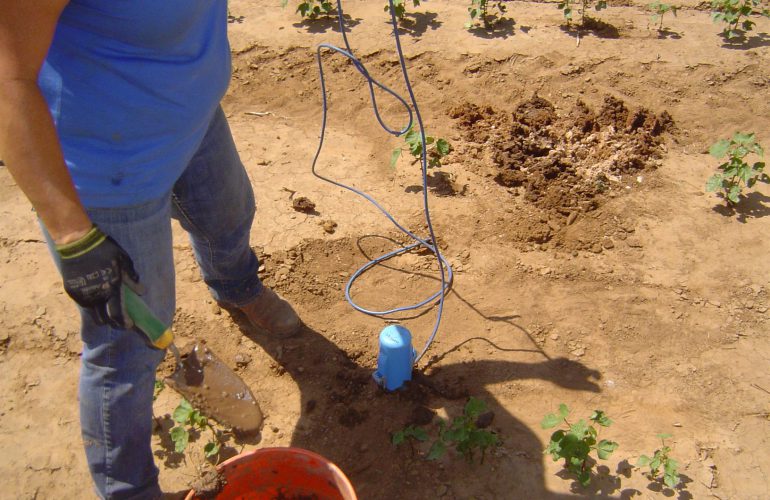 Once the soil probe is installed, only a small footprint remains. These units must be installed after planting and removed prior to harvest, but can be relocated for next years crop. Newer models are capable of being buried beneath the soil surface and do not need to be removed as tillage can be performed over the top. 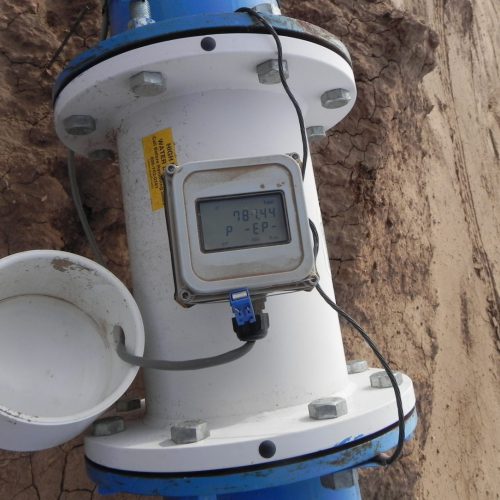 Water meters are another means of managing water. As the Ogallala Aquifer declines wells pump lower capacities. By knowing how much water a well is actually flowing a producer can better utilize his/her water and manage the delivery system by renozzling or changing the type of system or management strategy being imposed. 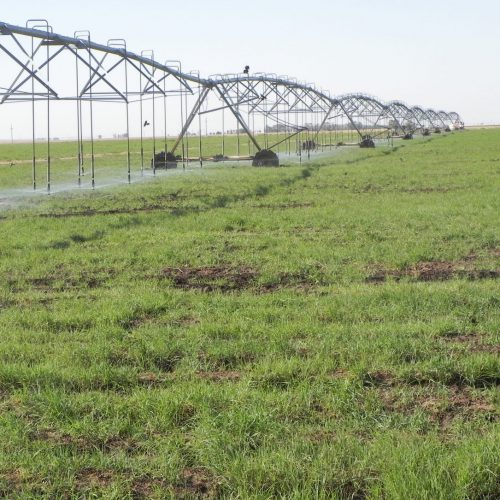 Different crops have different water requirements with some requiring more water and some less. One way to reduce the water used per unit of land is to return a part of this land to a warm season permanent perennial grass. This is one of the most water use efficient types of vegetation and had developed naturally in the original ecosystem of the area. This type of management builds soil organic matter, reduces soil erosion due to wind and water, provides cover for wildlife, and can provide income to the producer through grazing by livestock, hay, and grass seed while continuing to provide benefits back to the soil, and natural ecosystem. 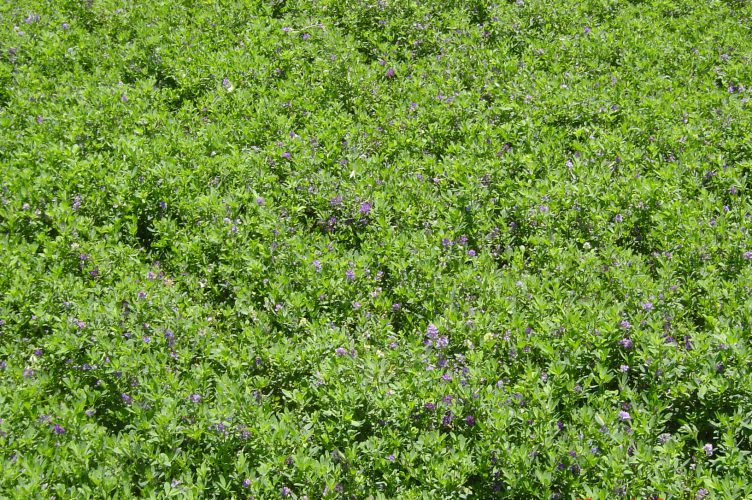 Alfalfa is an extremely high revenue crop, but requires high levels of water input for the production desired. Alfalfa however benefits from fixing its own nitrogen in the soil. Newer varieties use less water and there is much interest in interseeding legumes with grasses to increase the forage quality and reduce nitrogen fertilizer needs. 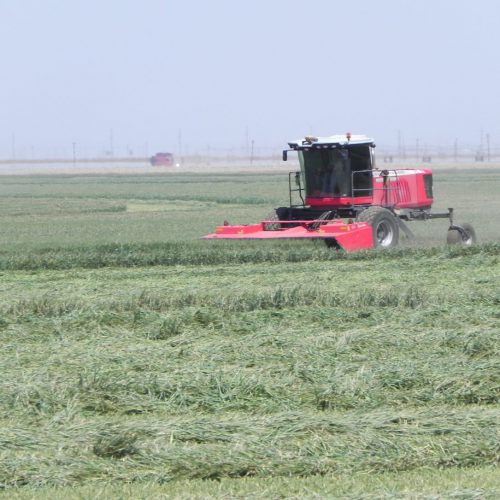 Water used for a specific crop can often provide additional outputs and thus income for a producer. In this case water was used to produce a grass seed crop, but following harvest the remaining vegetation is harvested for hay to be sold as supplemental feed for livestock. 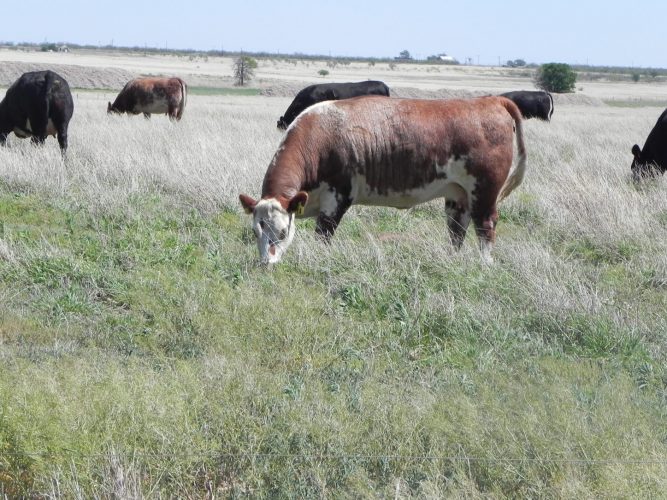 As water continues to decline in the Ogallala Aquifer, many fields will be returning to grasslands and as a result livestock will become a viable alternative to cropping systems and can be integrated into existing cropping systems creating new alternatives for producers. Through the utilization of integrated crop livestock systems producers can continue to produce high value crops on less water by concentrating water on fewer crop acres while continuing production alternatives on less favorable land that uses less water. 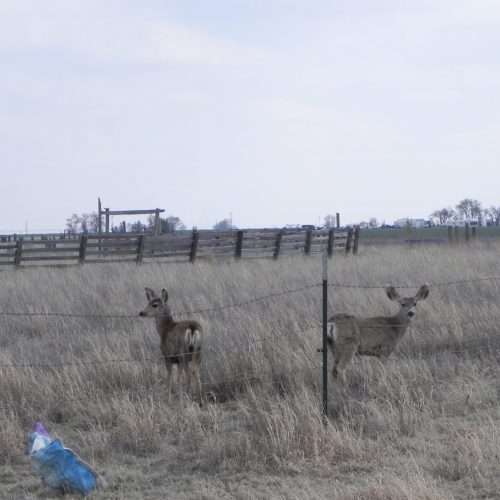 CRP (Conservation Reserve Program) land has been widely recognized to benefit wildlife. As some land returns to native and improved species of grasses, the variety of wildlife could be improved and potentially increase their population. Wild mule deer present on one of the TAWC sites are taking advantage of the dormant grass vegetation in the winter months as a source of feed and cover. 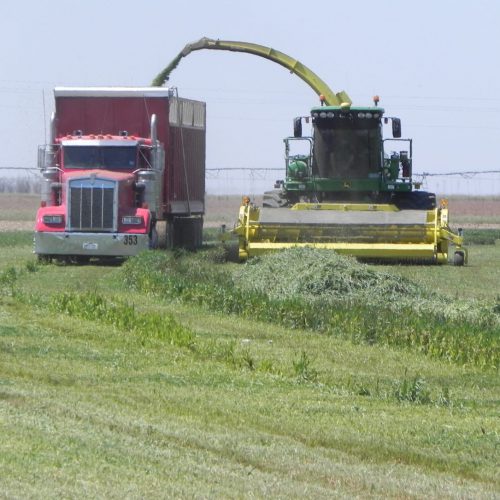 Though a higher water user, silage from wheat, triticale, and corn is a viable alternative for producing animal feed for the vast feedlot industry in the Texas High Plains where adequate water is available. 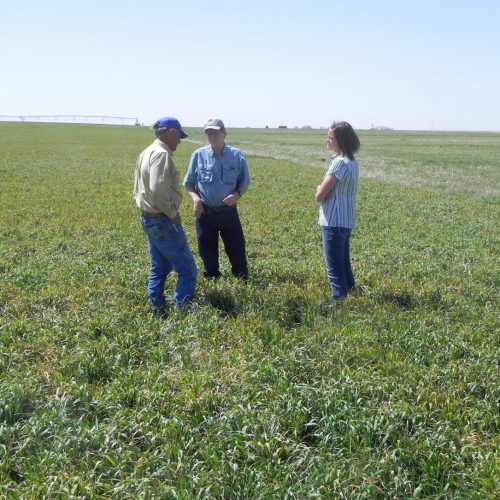 As we aproach the future we must work together, listen to the producers needs and provide strategies, technologies and alternative cropping systems to the ever changing environment to be prepared for the challenges ahead. The Texas Alliance for Water Conservation is determined to work with any and all who’s only desire is to promote agricultural conservation and are interested in the needs of the individual farmers and ranchers in the years ahead.